DATRI E-DRM was Live in NDTV 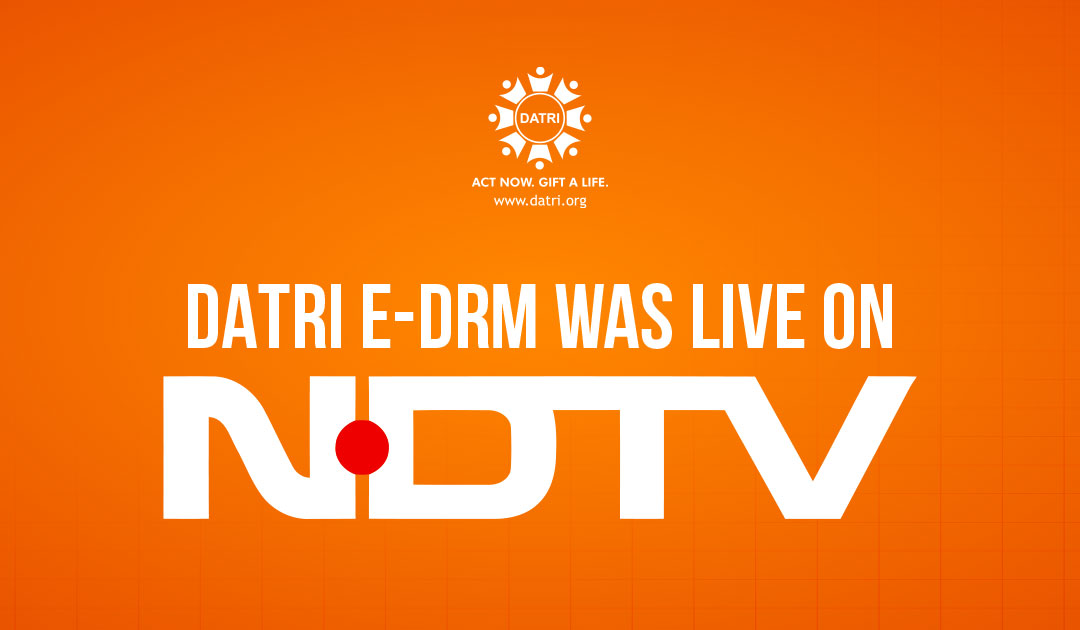 NDTV coverage – for DATRI E-DRM It all started when Dr. Gaurav Kharya, Apollo Indraprastha Hospital, New Delhi, contacted me and asked if DATRI would like to partner with them to create awareness for Sickle Cell Disease (SCD) – the orphan sibling of the slightly better known Thalassemia. He had a recipient, who was doing well 6 months post-donation and he wanted the coverage to happen on Sickle Cell Day – about 10 days later. It is said, when the going gets tough, the tough get going! Our mettle and resolution were tested by the challenges and hurdles.

The easiest way getting approval.  The idea was discussed in the  Leadership group and Bindiya was asked to connect with NDTV. Then the speed-breakers started. The recipient’s family had moved back to Bhopal,  Madhya  Pradesh due to the  COVID-19  spread in  Delhi.  The father of the recipient,  Mr.  Bhanu  Pratap,  was not very conversant with Zoom Calls or Skype and the Recipient, unlike most teenagers today, was not very technically adept.

It is things like this that we take for granted today, that bring to the front, how chronic illness can change a child’s childhood. After multiple calls and trials with Mr. Bhanu Pratap, we were ready. but the process was not over yet !! Two days later COVID-19 made its presence felt,  someone in  Mr.  Bhanu  Pratap’s office was suspected COVID, and hence till the report was received, they were living in suspense. Thankfully the report was negative!

NDTV also confirmed that they would not cover the recipient; as the recipient was underage, so if the coverage happened, they would only require the father’s presence. The 1st NDTV coverage – for DATRI E-DRM was challenged by the West  Bengal  Cyclone and now history repeated itself  –  with the  China insertion at Galwan Valley in Ladakh. Till late night on 17th we did not have a confirmation from NDTV due to the news situation. Then at 10:30 pm, I got a call from Bindiya informing me that NDTV wanted to do a Live session at 8:30 am on 18th! We immediately contacted Mr.  Bhanu  Pratap and  Dr.  Gaurav.

I  was  Sleepless in  Mumbai as I was afraid to oversleep and I also needed to be ready for my “first” TV appearance. The butterflies did not stop or sleep 18th came with sunshine and as I got ready, Mr. Bhanu called me to inform me that he was unable to log in and the NDTV team wanted some support. Thanks to technology, we were able to connect Mr. Bhanu (in Bhopal) with Dr.  Gaurav  (Delhi)  and me  (in  Mumbai)  with the  NDTV  team successfully and we were successful in creating a  ripple in the awareness of some more people regarding Sickle cell disease and the need for more donors to register.

Today, I am happy to share that the recipient is doing well and her family is profoundly thankful to Dr. Gaurav and DATRI for giving her a pain-free life. She is now planning for college. I also got to know about  NDTV’s humane side of not covering the young  (below  18  years) in such cases, hence only Mr. Bhanu Pratap (father) spoke. This also reinforced my belief that  DATRIANs don’t give up easily.  Hats off to Bindiya’s follow-up which made this coverage possible. I  also realized that  I  look  good  on  TV  and  speak  well  (despite  the  butterflies in my stomach)

DATRI is a Not-for-Profit organization founded in 2009 with a mission to save lives of those suffering from life-threatening Fatal blood disorders like Blood Cancer, Thalassemia, Leukemia, Aplastic Anemia, Sickle Cell Anaemia, etc.