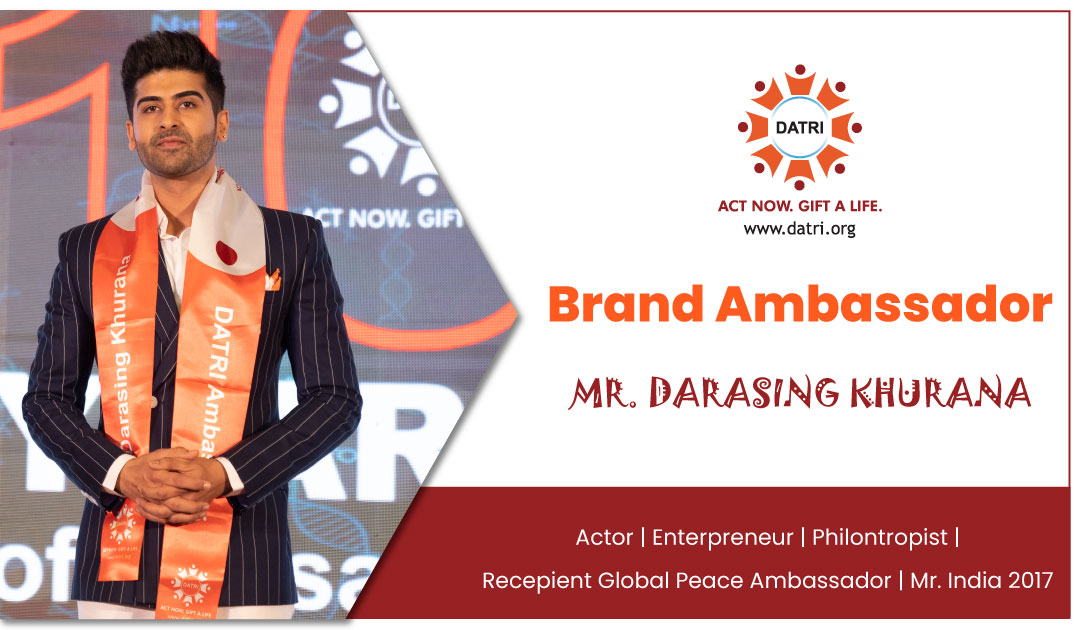 Darasing Khurana attained international recognition when he was appointed as Mister India International 2017 and went on to represent India at Mister International. After that, the model turned actor became a celebrity in the country and he used that influence of his to become the voice for a cause.

It has been about four years, since Darasing Khurana has been associated with DATRI and this cause, and in a heartfelt conversation, the philanthropist opens up about his association with DATRI, the not-for-profit organisation.

Tell us about your journey with DATRI, and how it all began? And who was your main source of inspiration?

My journey with DATRI, started in 2017 when I went to represent India at Mister International. I was always inclined towards helping the society, but during college time when I spoke about that, my peers would mock at me for it. So, I eventually stopped bringing it up. But, when I won the title of Mister India International, my father called me up and said, that people usually use such titles to move ahead themselves, but I should use it to help others too.While I was talking to the director of my MBA college, she told me the story of one of her family members who succumbed blood cancer.

That woman belonged to an extremely rich family, living in the US. She and her husband were a couple, who had been married for 10 years and had no kids. But, 10 years after their marriage and trying for so long, they had an unexpected surprise, a miracle and were blessed with twins. Six months after the delivery, the woman had a lot of back pain, but was told it might be because of going through pregnancy at her age and was told to ignore it. But, when they consulted a doctor, she was diagnosed with blood cancer. Unfortunately, they didn’t find any blood stem cell donor match for her.

The doctor told her that, she could live for over nine years, if she continued to stay strong mentally and she did. However, she kept losing one of her organs, after every few months on regular intervals. It was so painful to see her dying gradually for the entire family.

So, is this the reason, why you accepted to showcase your support to DATRI in their life-saving mission?

Hearing this story gave me goosebumps and I realised that, being a well-travelled guy myself, even I didn’t know much about blood stem cell transplant and its easy process. Without spending money, I could help people. So, that day I decided that I wanted to associate myself with a cause to help DATRI find more blood stem cell donors to help save lives. So, I got in touch with the President of Be The Match, a US based registry. They told me about the great work DATRI had been doing in India and encouraged me to associate with them and put me in touch with the CEO. I spoke to him on the phone and we just connected through our hearts and he offered me to become a brand ambassador for it and it was an instant yes for me. That’s how I joined hands with DATRI towards the end of 2017.

How has your experience been with the workforce at DATRI?

The workforce of DATRI is so enthusiastic. I travel across the country to promote the cause with various drives and programs that they hold and through them, I get to meet all of their employees. I am always so surprised by their excitement, enthusiasm and professionalism. Most of the people working in DATRI are not taking up this work as a job but doing it with their heart. And that is what makes their work and the organisation all the more special.

DATRI organises a donor-recipient meeting (DRM) when the patient gets to meet their donor and it’s always such an emotional moment. When I was offered to be the brand ambassador for DATRI, I was invited to one of the DRM meetings, where I got to witness this all-first-hand experience and it was one of the most emotional moments of my life. Seeing the overwhelming emotions flowing around, I could feel every bit of it even though I didn’t understand their language. So, all my DRM experiences have been very cathartic and no matter how busy I am, I always look forward to them and make time for them. These are the moments I live for a lifetime.

‘I am myself eagerly waiting to be a match to someone and help save a life – Darasing Khurana.

DATRI Blood Stem Cell Donors Registry a not-for-profit organisation, was incepted in 2009 to find unrelated matched donors for patients with leukaemia or blood disorders whose life is dependent on an unrelated donor to survive. DATRI, India’s largest registry with more than 4.6 Lakh donors. Any healthy individual between the age of 18 years to 50 years can register as a blood stem cell donor with DATRI and potentially become a lifesaver when they’re found to be a match for a fatal blood disorder patient.