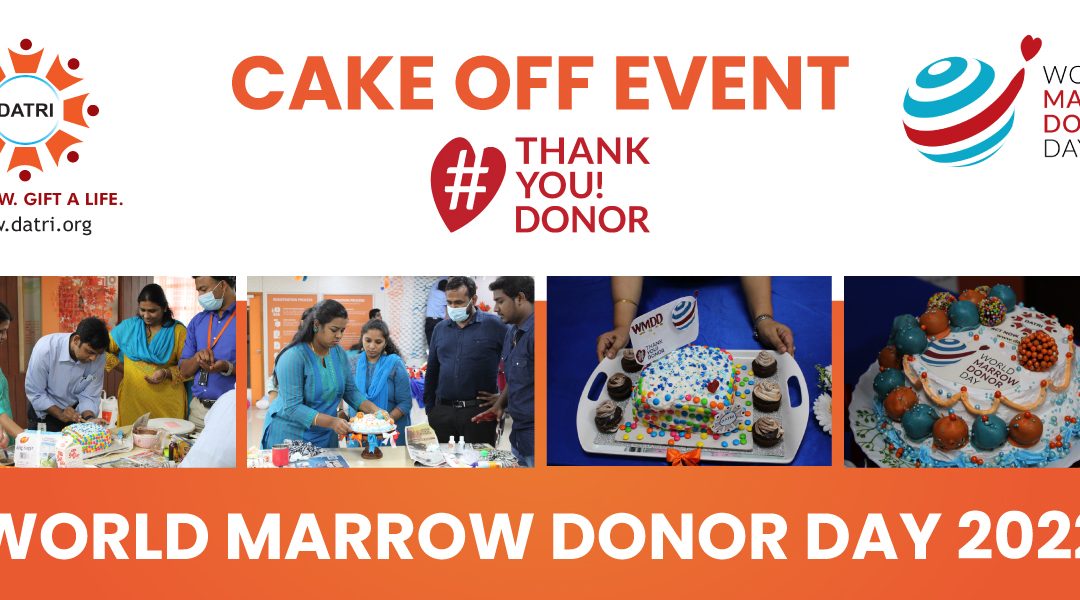 I was just about a week-old at DATRI. As a newbie I was trying to understand my work and how to go about. This was when in the office one day, the Marketing and Communication team along with the HR called all the staff and announced that we were going to do an activity that is -Bake a Cake ahead of World Bone Marrow Day falling on September 17. The question everyone asked was why we were doing this.

Pat came the answer: “Our Donors are Special”. And this World Marrow Donor Day, we will honour them and show our appreciation by baking a cake. The organisers said the staff would be divided into two groups led by Pallavi Jayraman and Benjamin Felix. Each group would bake a cake and deck up the place. The next Question-Who would judge the cakes? It would be none else but select donors who would grace the occasion and judge the beauties.

Being a new person I was excited and yes the activity interested me as I was proficient in cake baking. I felt I could showcase my expertise and earn a bit of fame I surmised from my colleagues that this was the first time that the staff were doing an activity like this. All of them had mixed thoughts about how this activity would turn out. Once the groups were formed one could see that there was a sense of ownership and the zeal to put up the best show. The groups we asked to discuss their cake and strategy to win the prize. In the following days one could see the groups meet together at lunch time and teatime to discuss from the recipes to decorations etc and the meetings were so serious and professional that one felt that even our work meetings could not match up.

The groups gave a big list to the Admin team for things needed to do up the place and for baking the cake. As the day neared for the competition, one could see colleagues bring in Oven Toaster Griller, Stand Mixer, baking items, and whatnot. It was certainly looking like we were participating in the Master Chef contest.

The D-Day arrived and all the men and women came in blue. It started with a pep-up Session-Quiz Time to get us into the groove. The quiz was a refresher about our work, a few nice questions about our colleagues and some quirky and funny questions.

After winning prizes in the quiz, the teams regrouped and started the baking session. There was total enthusiasm and excitement and the place was full of sounds, commands, and orders! Beat the eggs, look at the recipe, get the oven heated, and stick the logo. There were two DJs – Aakash and Vinod who were at their best, trying to distract the team during the cake preparation, cracking witty one-liners and yes there was some good music in the background. One could also see some flops in cake baking, but those got camouflaged with tips from baking experts. 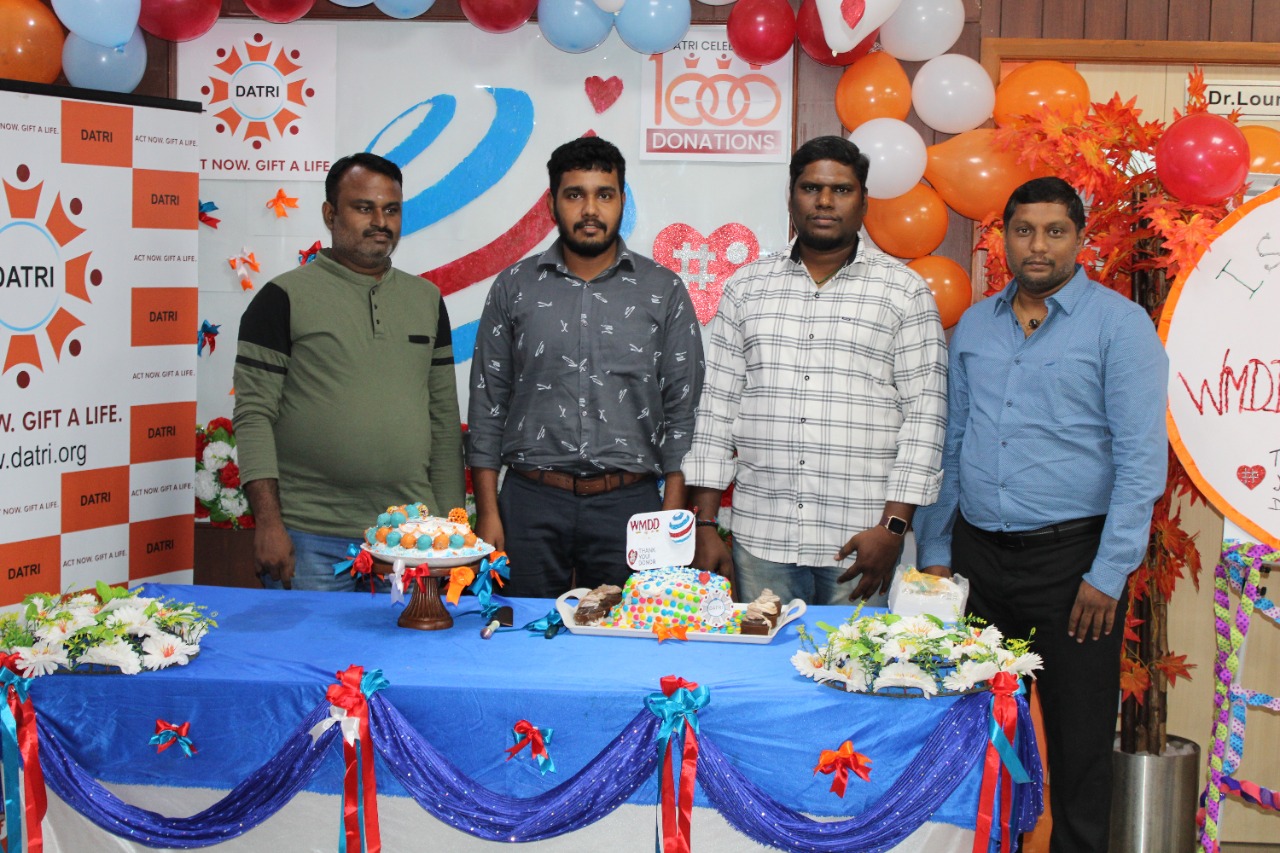 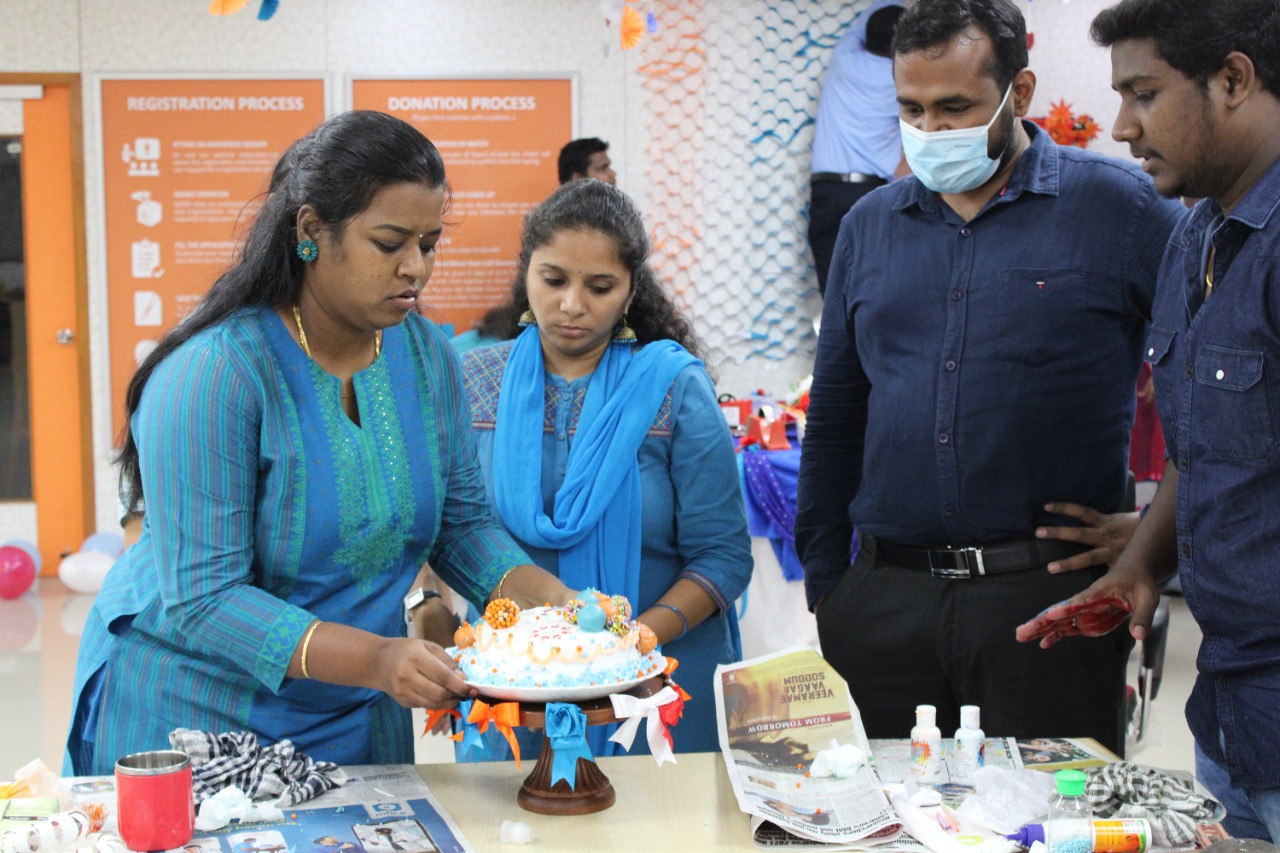 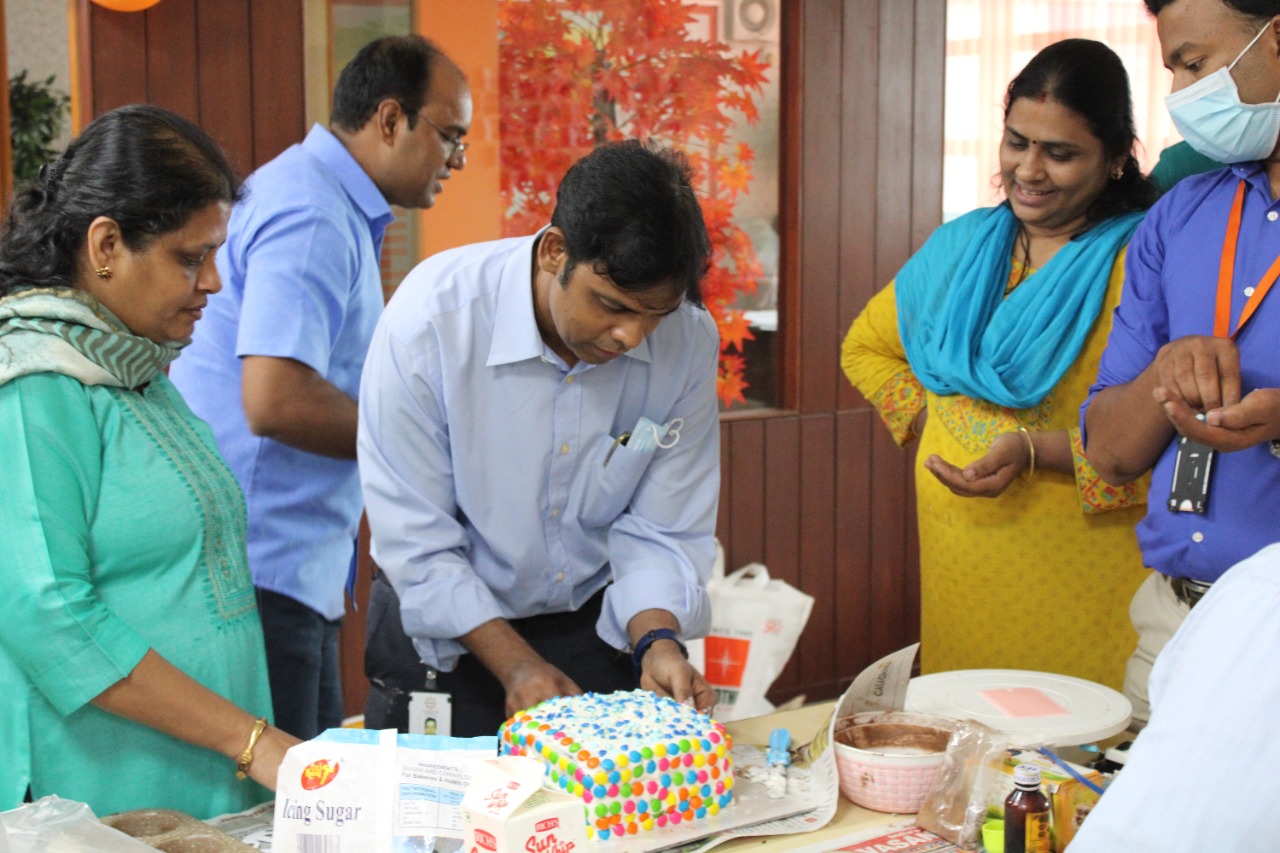 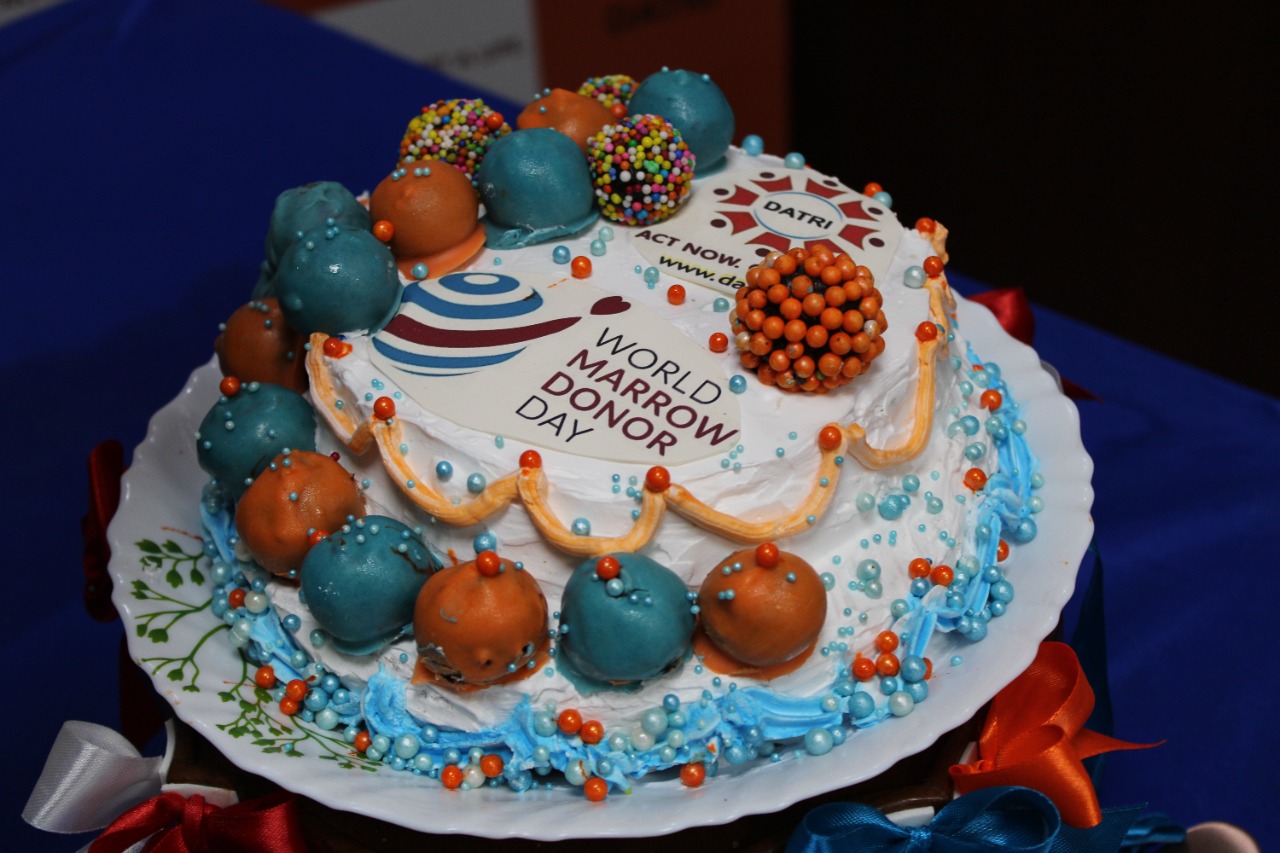 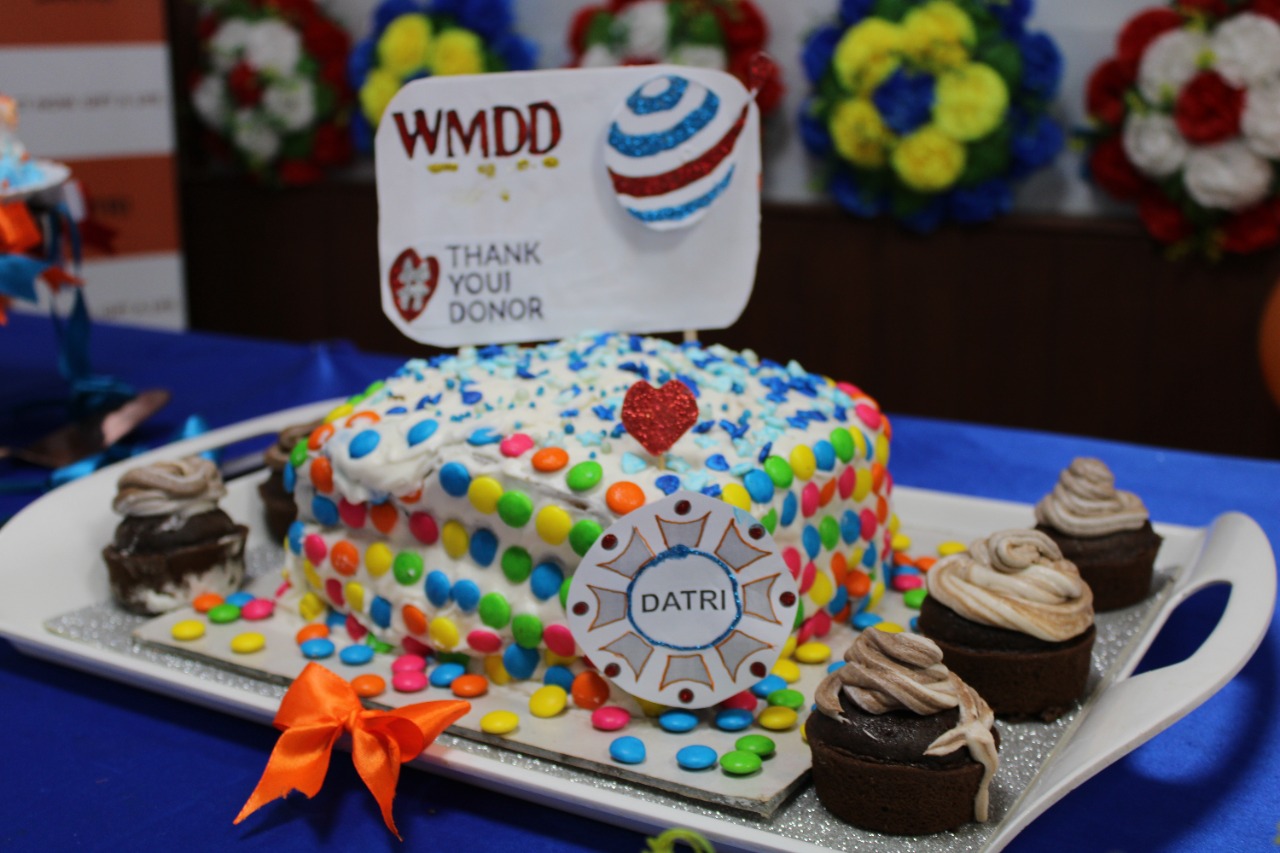 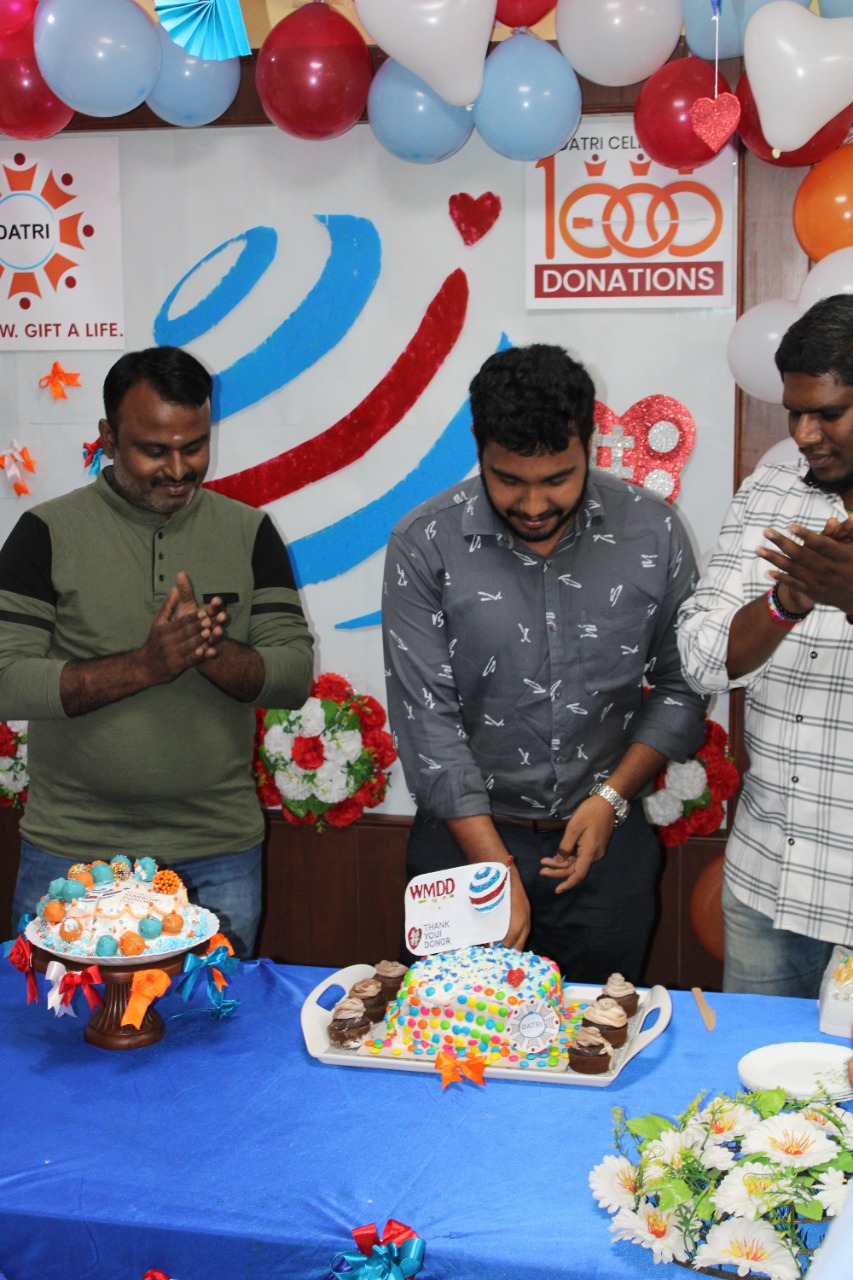 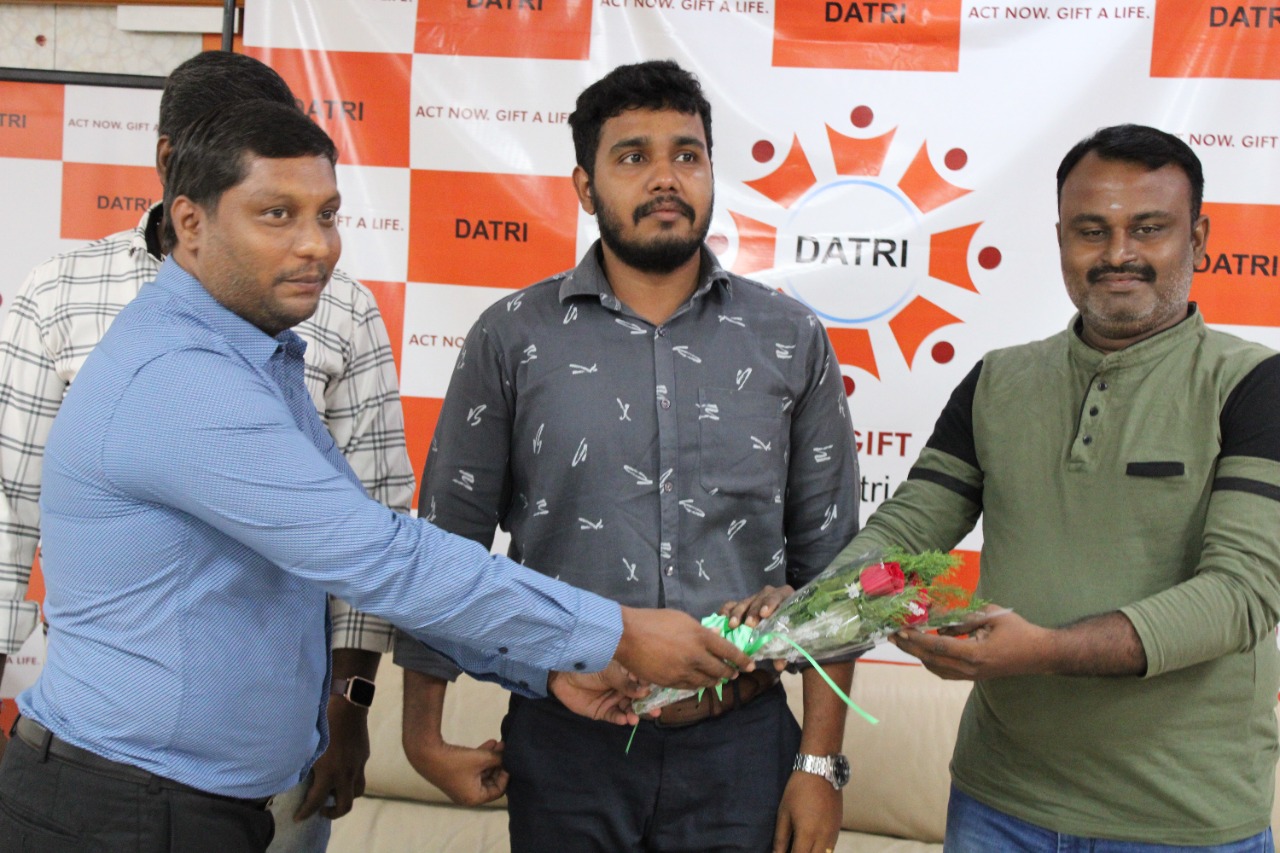 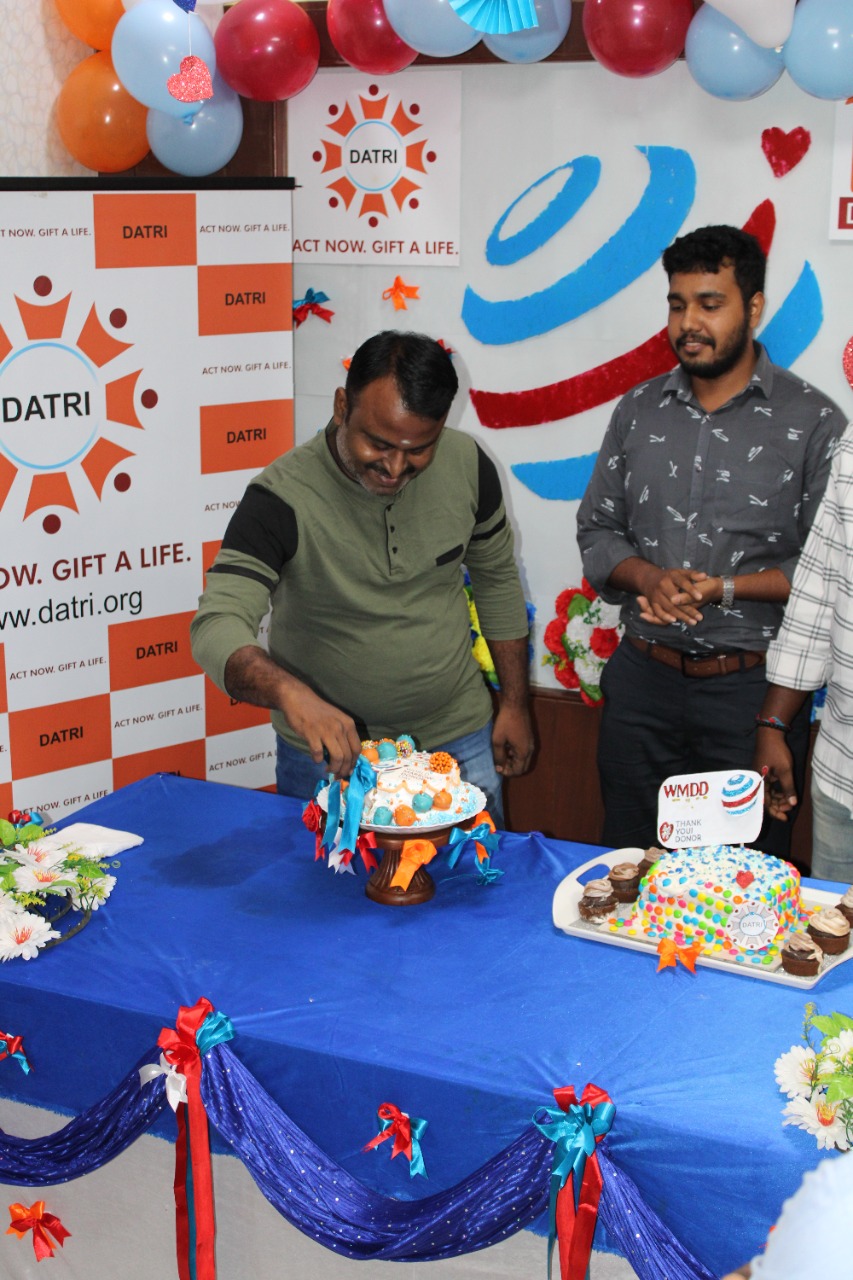 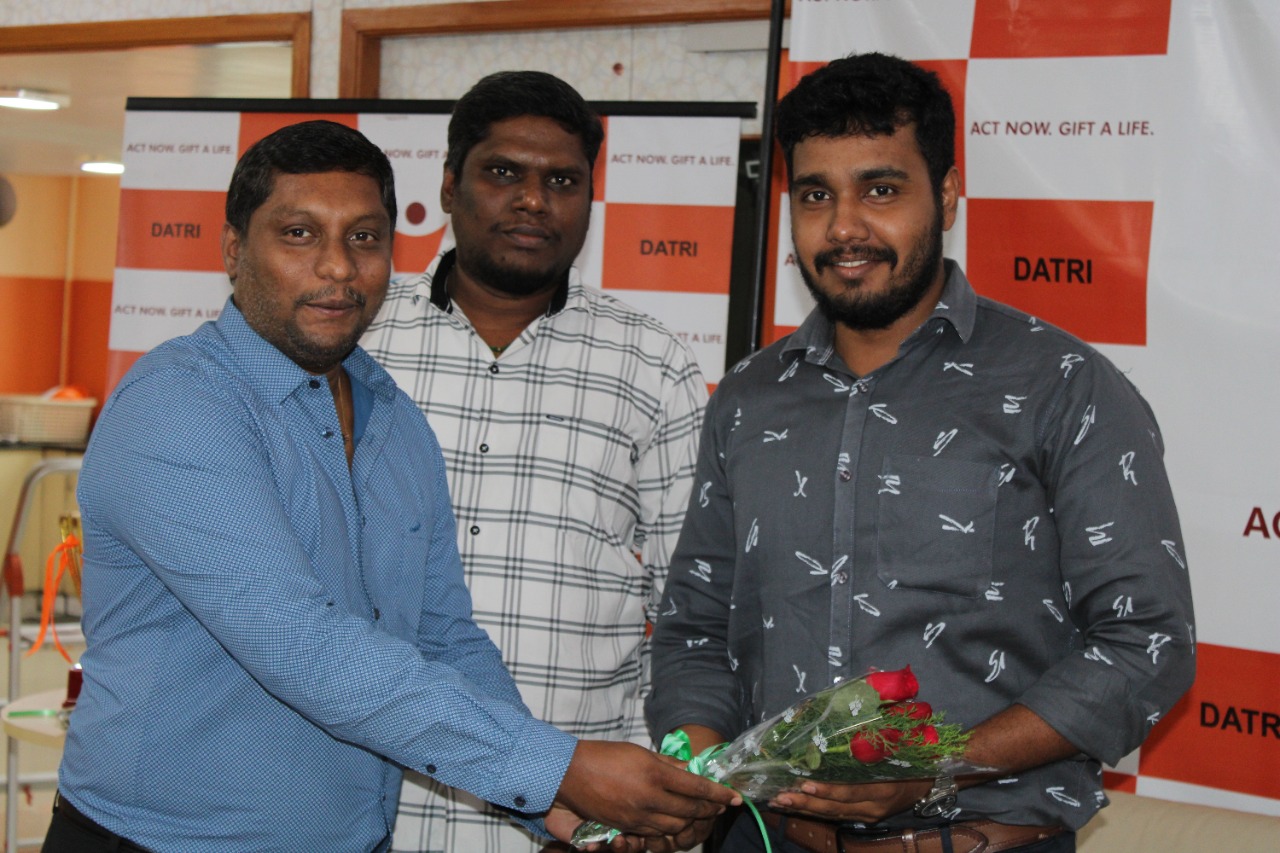 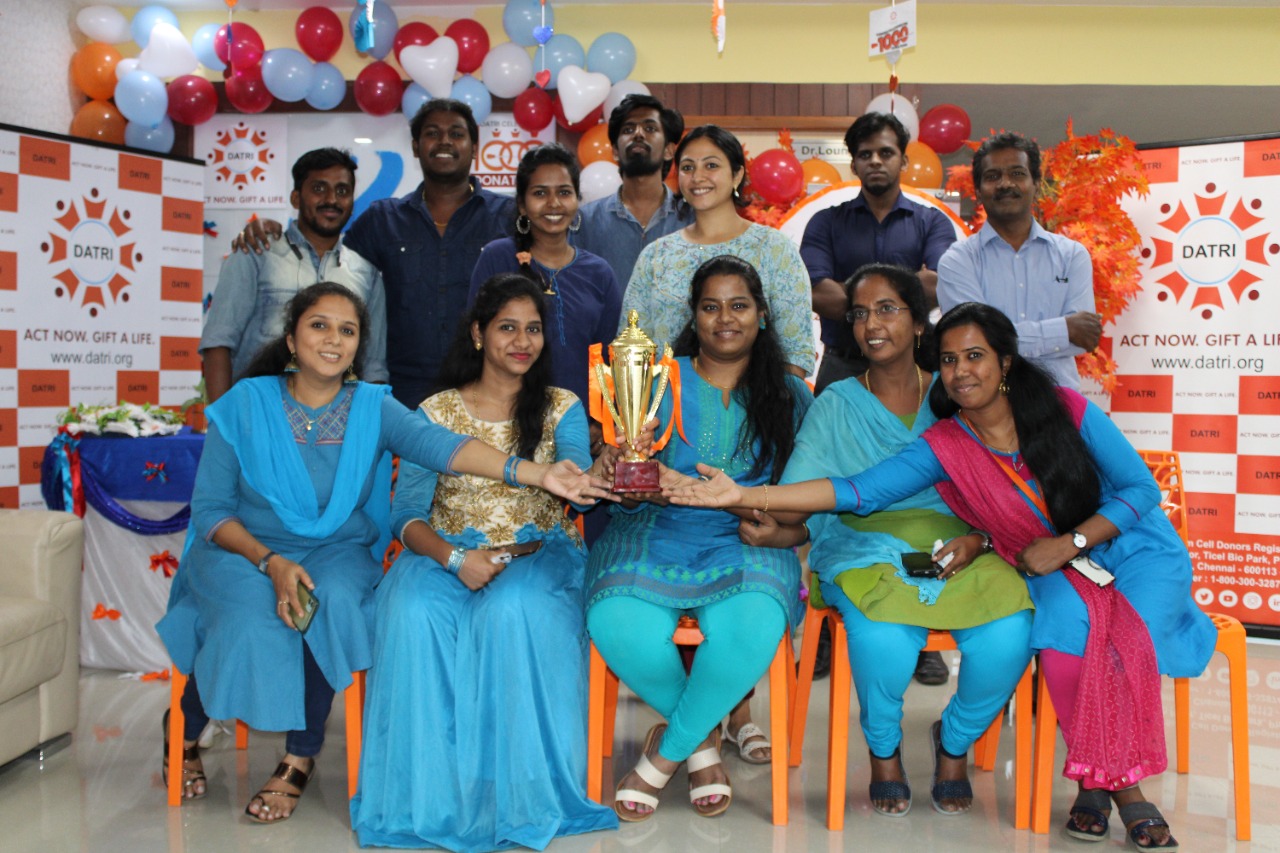 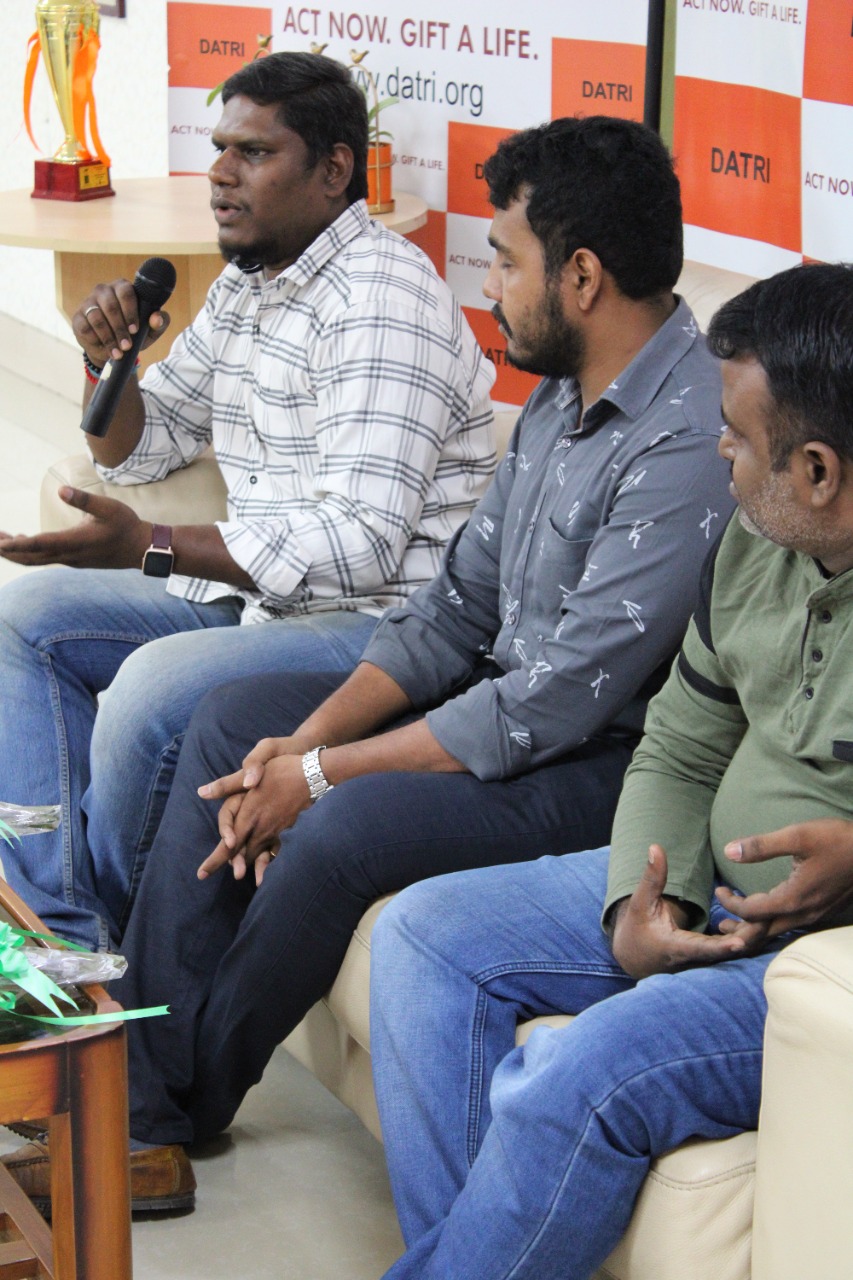 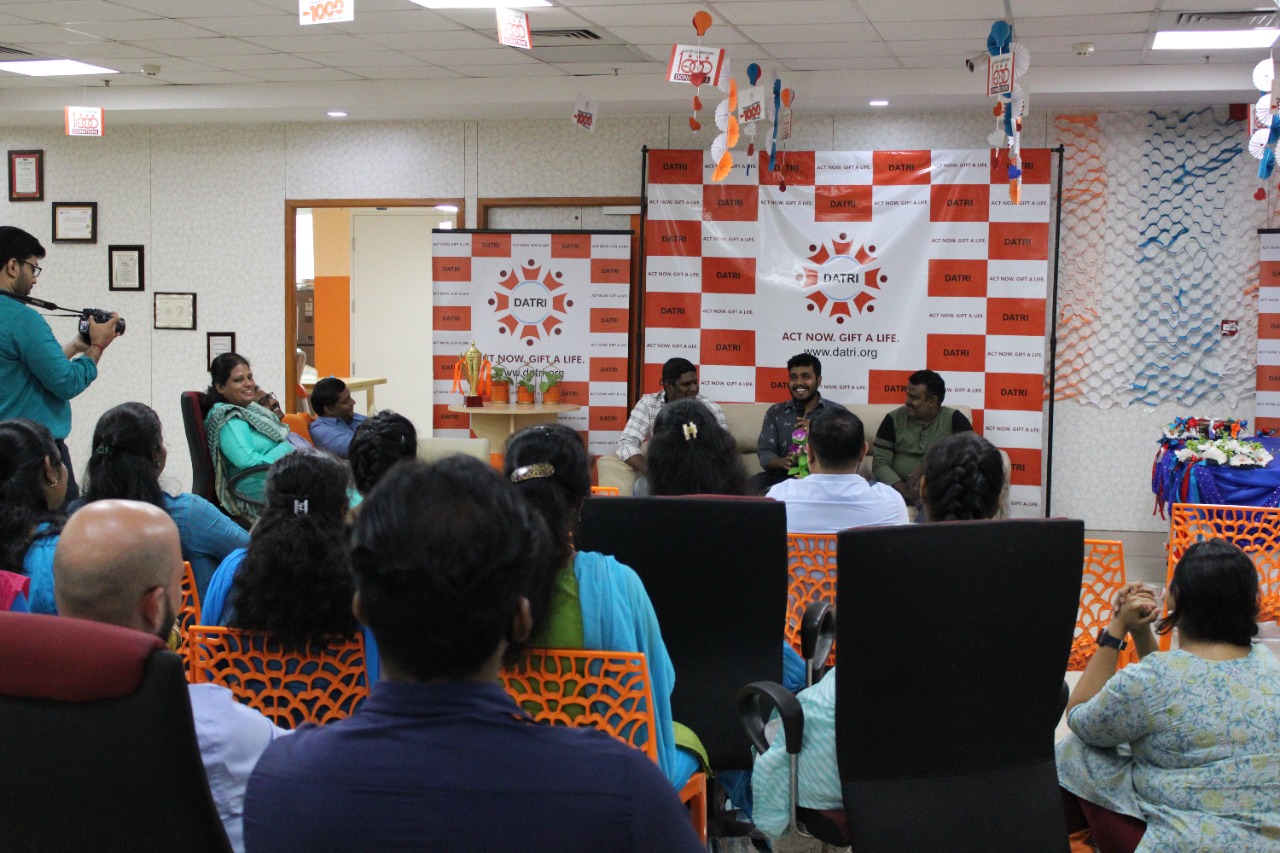 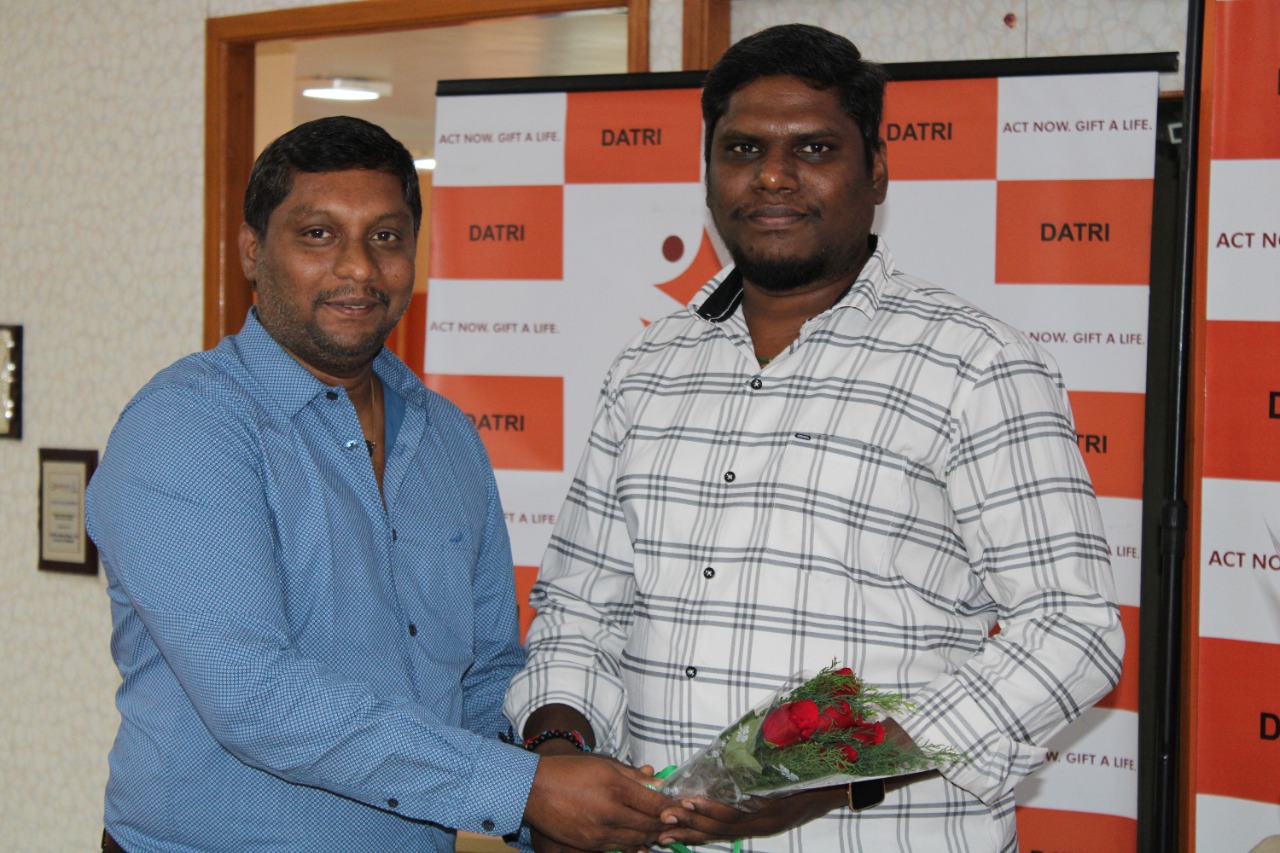 42The cakes were baked, decorated and tucked into the refrigerator. They looked so professional that even the best bakery could pale into insignificance. Once done, the organisers had a surprise under their sleeve. They gathered everyone for an impromptu dance! What a way to finish the baking session. Even the shyest or the quietest colleague could not escape shaking a leg. Checkout the dance video: https://bit.ly/WMDDCelebrations

Next it was time for the evening celebration-felicitating the donors. Three of our donors came for the celebration. The donors were told that they would have the cake and eat it too, that they had to judge the cake. They started with sharing their experience of gifting lives and how this act had left a deep impact in their lives

Baking a cake for our donors, getting them to be part of this special day and honouring them made me feel that this exercise was so meaningful and fulfilling. It was really nice to see that each one of us had something to do to contribute for this special day. In our mission to gift lives, this activity helped us to reinforce our commitment and passion for the cause we are here for!

Perhaps this is the Best Cake Ever Made I am Dhivyaa, a former cancer researcher and a Bharatanatyam dancer. My interest in cancer and in some small way helping to find a cure is what got me here, at DATRI. I am also a makeup artist and take on projects in my free time. Aside from this, I love to cook, work out and make jewelry. It has been two months since I joined DATRI and so far I love it!!