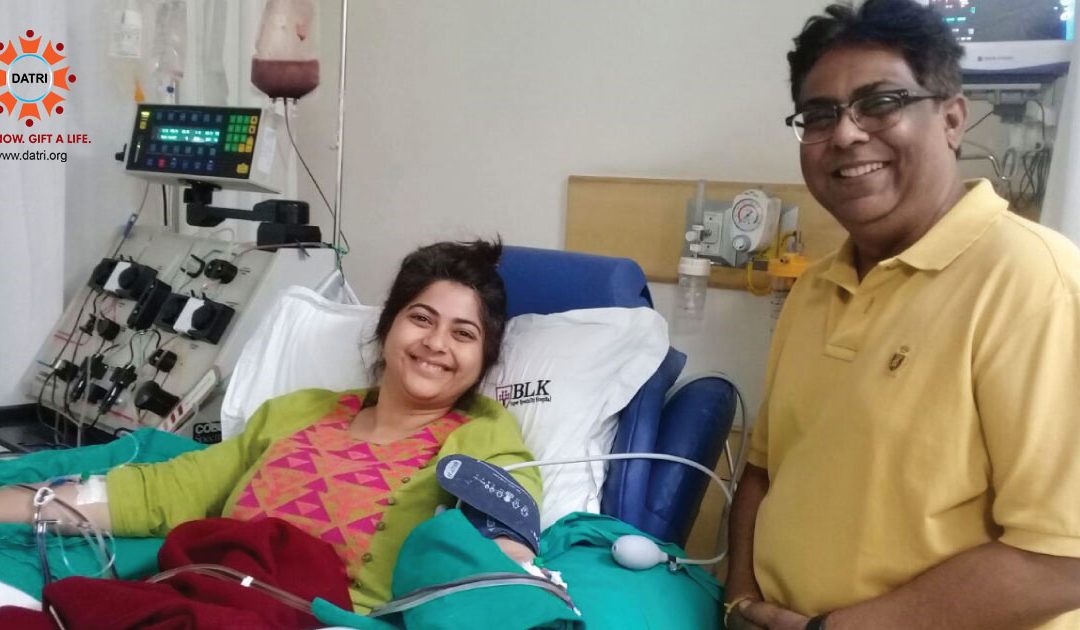 Ritika’s veins were too small, and the donation wasn’t smooth
for her or the doctors. Here’s how she steamed through

Ritika is a journalist, making her a person of the fourth pillar, of democracy, of the media. Her job is basically to keep a steady moral compass in the face of complicated truth-telling. Ritika’s KRAs include writing about issues in the supreme court and the judiciary. This means she has superhuman abilities to keep her eyes open in rage-inducingly monotonous settings, think clearly under pressure, and make sense of volumes of dull legally so she can (responsibly) help ordinary citizens make sense of them. Her job is to keep her eyes open and her brain working at all times, and she pulls this off like a natural.

This is why, as soon as she received the news that she had been selected to be a match, her first impulse was to mentally run through all the things she would NOT stand for. On top of that list was “I will not make a rash decision.”

“When I got the call from DATRI Blood Stem Cell Donors Registry, I was with my dad at that time,” says Ritika. “When I told him, his response was a flat-out no. So I said, don’t be so hasty, and don’t make a split-second decision, because this is a one percent chance that somebody is banking on you for life. The least we can do is to think it over, research what it is about, satisfy our curiosity if there is any, and then make an informed decision.” He agreed, and together they proceeded to do just that. And how. They spoke to many people, asked lots of questions, and researched and researched and researched.

Ritika admits that though her decision-making process was rigorous, her conscience had made her choice for her.

“I just wanted to be clear that it would not harm me, and Blood Stem Cells donated would eventually go to the patient and nowhere else. I asked many questions, and I just needed to know how the end-to-end was connected. You hear at least I’ve heard all these scary stories and many scams. It wasn’t about any social or moral issue; for me, it was only about the operational value of it.”

Another thing about Ritika is that she is terrified of needles and hospitals. “I’d, touchwood, actually never been to a hospital, I’d never taken medicine. I don’t know what medications I’m allergic to!” This made her choice to put herself through thirty-odd blood tests and GCSF injections (and many, many needles) a pretty big deal. She dragged her father along to the hospital like a kindergartener on the first day of pre-school and remained awake, attentive, and very paranoid throughout.

As it happened, the person administrating the GCSF injections noted that the veins on her bony arms were fragile and difficult to pin down. The doctor on duty during the intravenous procedure remarked vaguely about maybe needing to inject the needles elsewhere on the body. Ritika and her father were not going to have any of that. So, as painfully as it turned out for those involved, Ritika mustered everything she could to co-operate, as the nurse in her words “managed her anger on [my] arms.”

“The nurse had to stand next to me, holding the needle at a particular angle for two-and-a-half hours while I squeezed a smiley ball continuously to keep the speed of the blood flow high enough. After two-and-a-half hours, this entire thing started hurting me. I had hit my maximum.” Ritika was at the end of her tether, in much pain, and she felt like she was on the verge of quitting. But quit, she did not. She decided to put off the stress by taking a break and giving herself a pep-talk.

“I told everyone I needed to go to the toilet, so the doctor unhooked me from the machine, and I took a breather. I thought, ‘This is not happening, it’s hurting, but you know what, I have to go through it. I’ll just have to find a way.’ My dad and I spent the next half-an-hour just looking at each other, and he had a look on his face that said, ‘You wanted to do this.’”

Once Ritika was ready, she got back on the bed and prepared for the next leg. The vein had dried up, and the nurse had to do the whole process of “slapping the heck out of my arm and piercing it all over again.” but this time, she tried something different. “They found an angle at which to pierce my veins where she did not have to stand holding the needle for hours. After the break that I had, I was a lot more comfortable. I sat on the bed the way I wanted to and told myself, ‘Okay, let’s do this now.’” The procedure was a success.

“The patient had a one percent chance that she and her family were counting on me for, and I couldn’t have that on my conscience and not go through with it,” Ritika reflects. “My father was still hesitant, and he only agreed because I told him, ‘What if this was one of us?’ My mom was too scared to come with me to the hospital.

My advice to prospective donors would be: Don’t say no right off the bat. Just consider that someone is counting on you, and this doesn’t cost you anything in the first place. If you have to say no, there better be a bloody good reason. Take responsibility to know all you can before you say no. The individual may live or die, but it’s the family that’s spending so much money but still banking all their hopes on you–they are the ones who have to carry on living with it. It is essential that when you’re in, you’re all in and don’t quit.”

DATRI is a Not-for-Profit organization that was founded in 2009 with a mission to save lives of those suffering from life-threatening fatal blood disorders like Blood Cancer, Thalassemia, Leukaemia, Aplastic Anaemia, Sickle Cell Anaemia, etc

Take the First Step to Save Life.