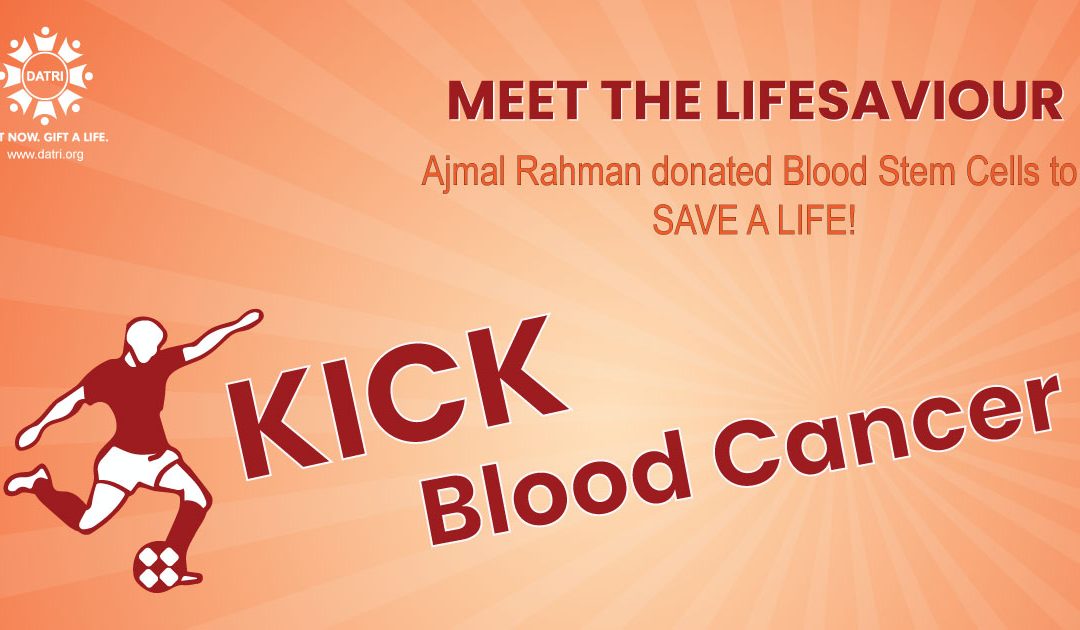 To say that Ajmal Rahman loves to play football would be an understatement. “Football–it’s in my heart,” says the Kerala-based piping engineer. He’s been playing it since his childhood, throughout college, and even in adulthood. He cannot imagine a joyful life without it. When DATRI Blood Stem Cell Donor Registry’s Kerala co-ordinator Mr.Aby Sam John reached out to him with the news that he was a match, his first question to him was “Will I still be able to play football?”

The sentence ‘Aby Sam John reached out to him with the news that he was a match’ is a deceptively simplified version of the actual events. Ajmal missed about twenty calls from the coordinator because he was playing at a nighttime tournament. When he saw them around midnight, he was utterly mystified, but not as much as he was to find Aby waiting outside his home. Aby had wasted no time in tracking him down to his home in Ernakulam through social media and some common contacts. The situation with his patient-match was that urgent.

“Usually, donors get lots of time to decide whether or not they want to donate. Some take two to three weeks to decide! But for me, I had just a few hours,” he says. The patient’s condition was so serious, that he needed to be ready for his first GCSF injection at 9am the very next day. He couldn’t place Aby’s face, nor remember what stem-cell donation was about. The irony was that just the previous year, Ajmal and his friends had organised awareness drive in their college alongside Aby. They, along with around 2000 college-mates, had registered to donate. “You know how it is in college,” he chuckles. “We go with the flow. We found out through the media about a patient of alymphocytosis, (an immunodeficiency syndrome), a Malayali NRI child named Sachin Sijoy. He required a donation, and we simply decided to help out. We didn’t ask any questions, one of our professors was helming it and had done the whole, background check on DATRI. The whole time, we thought it was as simple as a blood donation.”

After Aby’s conversation with his family, Ajmal was convinced about the safety and the benefit of the procedure. “We were unprepared when Aby turned up at our house so late at night, but we went ahead entirely believing in him.”

He had one nagging concern before he made it for the first GCSF injection, though. The acceptability of organ, bodily tissue, blood or stem-cell donation fall into a bit of a grey area for many Muslims and for him, it was a major concern–perhaps the biggest one.

“I made an early morning call to someone I trust in, who is a teacher at the Madrasah. I asked him if Blood Stem Cell Donation was forbidden in Islam.” The teacher put him in touch with his own spiritual guide. “He said, ‘According to me, organ donation is not forbidden, as long as you are not doing it for your personal gain, and it does not do any harm to donor or receiver. If it is a blood-donation like a process, it is not a problem because stem-cells, like blood, are re-grown within the body.’”

Thus persuaded, Ajmal went ahead. “I only needed to know that I had the support of my parents, my religious mentor and my two best buddies, Tanzeel Azeez and Riswan Haneef. Aby and my friends were by my side throughout.”

Three years on, Ajmal still plays football, and he is very happy with his decision. He helps Aby counsel prospective donors and he is pleased with the increasing awareness of this safe mode of Blood Stem Cell Donation in Kerala.

“Blood Stem cell donations have become like a trend in colleges in Kerala,” he says. “People register, take selfies and really spread the word. The positive is that we have more registered donors, but the negative is that they don’t fully prepare for the event that they might become a match. When they find out what it really is about, they panic and don’t explain properly to their parents, who say no.”

His parents weren’t all for it at first either, and they were chagrined to be disturbed in the dead of the night. “They said ‘Five days of injections! How can you say there won’t be side effects?’ They said no to me.” But after allowing Aby to explain the seriousness of the patient’s condition and the whole process of the donation, Ajmal’s family began to understand and empathise. “The thing is, many of the elders remember stem cell donation as that surgical procedure where the cells are drawn directly from the bone marrow of the spine itself,” he posits. “The non-surgical process is still new and not many people know how much safer it is. There is a hike in awareness, but that doesn’t tackle the root. I hope more and more people outside of colleges understand it and register.

If you are really impressed by Ajmal’s story and want to give second chance to the needy Please register with DATRI Blood Stem Cell Donors Registry today.