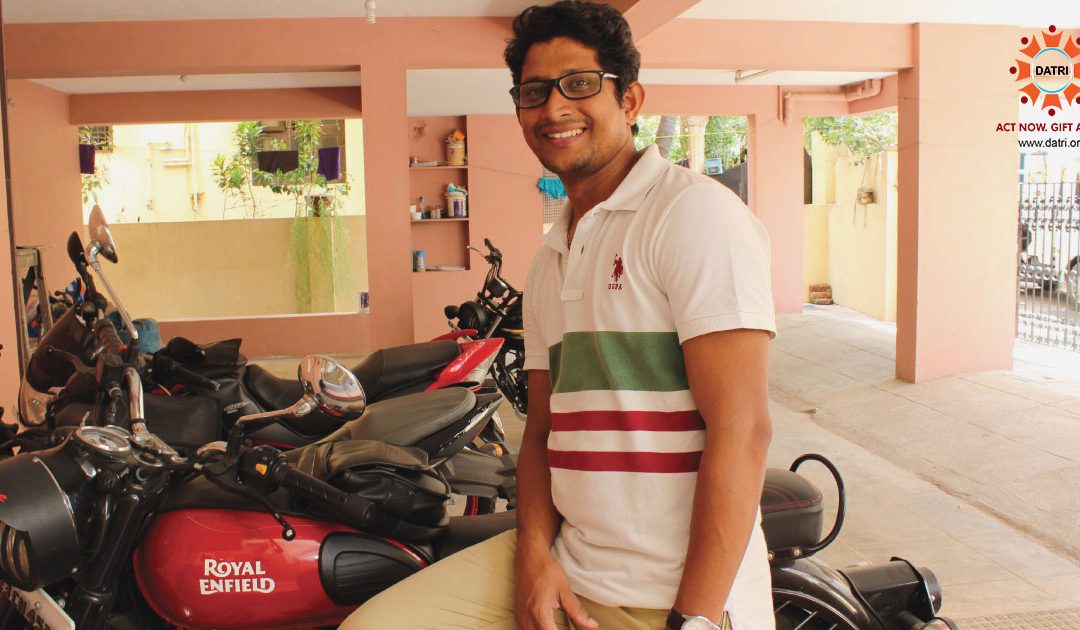 Perhaps no donor to date has researched in as detailed a manner as Praveen Kumar did before agreeing to donate his Blood Stem Cells. He analyzed it from every angle possible–its medical, rational, spiritual, and philosophical implications. He spoke to many people, including doctors, family, friends, colleagues, members of the DATRI team, and more. He even enlisted his wife, an organic chemist, to look into and help him understand what the chemicals used in the GCSF injections do.” I’ve never even donated blood before. Till the last minute, I was terrified. But I also wanted to give it a try because of the way Balaji (from DATRI) explained it. He said it’s like giving birth to a child, which, being a man, I can’t. But I surely can provide life. So why not? I could try, I could try to understand the process.”

One of the people he spoke to was a close friend, who said an aggressive, almost pleading no. Praveen knew his friend’s uncle was a doctor from Manipal and asked to put him on a conference. “When his uncle picked up, my friend asked him ‘Should Praveen donate his stem cells?’ and his uncle said ‘Absolutely.'” There was a dial tone at the end of that conversation. Praveen’s friend had hung up. Though he got a respected medical practitioner’s validation, it had been unnecessary. Praveen had known all along that he wanted to do it.

He went as far as to fix the Blood Stem Cell Donation dates, but Praveen’s resolve would be put to the test. The day before, the Chennai-based financial manager’s first GCSF injection was due, and he had to be in Mangalore for a dear friend’s housewarming ceremony. “I asked (DATRI), ‘Is it possible for you to arrange a GCSF injection in Udupi?’ They said no, we don’t have a facility, but we do have it in Bengaluru.” Praveen had been hoping that the first injection wouldn’t be so crucial, but now he had to make a choice. The patient was already going through the essential, time-bound preparations for the procedure at some other part of the country.

The solution was apparent he would have to go on a day trip to Bengaluru and return to Udupi as soon as his injection was done. It would be two long train journeys back to back. Praveen began to get jittery. “Suddenly, the thought occurred to me: ‘I’m going to be traveling alone for hours. What if there’s a side effect on the way? Would that be an unnecessary risk?’ I booked two tickets: one for AC and one for the sleeper and got heavily waitlisted. I carried myself forward-thinking, ‘I’m doing these things for good. If God wants me to do this, it definitely will come through.'” In the morning, he was in for an unpleasant surprise. The chart was prepared, and he lost both tickets. One of them had come up to Waitlist 1. So positive had he been that God wanted him to Donate Blood Stem Cells that he had a big reason to start wondering if God was really on his side.

“My nature is, if there is a problem, I leave it there and wait for it to sort itself out. I come back after some time, perhaps take a walk, and then I sit with it again. This time, I had to push myself not to do it. I had to make a decision urgently. Someone’s life was at risk!” Praveen jolted out of his comfort zone. “No. God is testing me. He wants to know if I’m serious about this. Suppose I will leave it or go. If this has to happen, I have to make it happen.”

And so he did. That night, Praveen got into the general compartment of the Bengaluru-bound train and made it in time for the injection in the morning.

As he traveled in the sweaty, scraggly throngs of the General compartment for the journey to and fro, Praveen did some reflecting. He was inspired to see things slightly differently. Though analysis had been his go-to way of coping with the unknown, it was finally his inner drive that saw him through to the end.

The Peripheral Blood Stem Cell Donation itself went well. Unlike many donors who take painkillers to cope with the aches and pains that can sometimes accompany the process, Praveen required none. He cannot wait to meet his patient match. He still cannot believe that the number of registered donors with DATRI is a fraction of the population.

He sees it through the eyes of the pharmaceutical industry, where he works. “There are healthy people who consent to the possibility of life-threatening danger to test new drugs and vaccines. How did we get the cure for malaria? They do this not knowing what lies in store for them. But Blood Stem Cell Donation is safe! After performing hundreds of them, we know that it is entirely harmless to the donors and beneficial to patients.

If you want to know more about DATRI, please read the below heads up and register with us.

You can also become some once lifelike Mr. Praveen Kumar

DATRI is a Not-for-Profit organization that was founded in 2009 with a mission to save lives of those suffering from life-threatening fatal blood disorders like Blood Cancer, Thalassemia, Leukaemia, Aplastic Anaemia, Sickle Cell Anaemia, etc